We inspire and guide children to love learning, to love one another, and to love the world around them.
Discover

History of the Montessori School of Northern Virginia 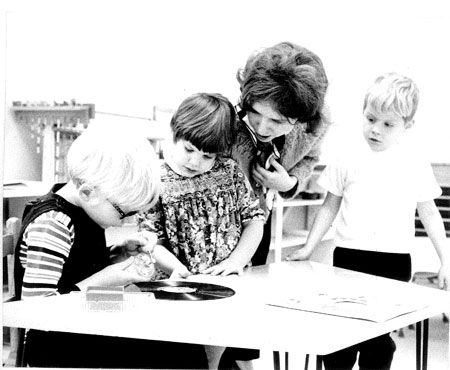 In our earliest days, a group of progressive thinkers and parents of preschoolers in the D.C. area became inspired by the work of Nancy McCormick Rambusch, an American credited with reintroducing the Montessori movement to the U. S. in the late 1950’s. This parent study group formed the nucleus of original founders of the Montessori School of Northern Virginia. MSNV was officially incorporated in 1962 becoming the first Montessori school in the Commonwealth of Virginia.
The fledgling school opened as a parent cooperative with 14 children. In the early years, the school was housed in temporary facilities– church basements, a fire hall, a Knights of Columbus hall and briefly, in a parent’s basement. The first teacher received her training from Rambusch’s center in Greenwich, Ct. As the school grew, added classrooms and needed more teachers, the newly formed Washington Montessori Institute in D.C. became our primary source for trained Montessori staff. A demand quickly grew for elementary grades and our first elementary teacher was hired in 1967. There was always plenty to do to keep the school operating and parents were required to contribute at least 100 hours of work per year.
In 1967, the Board of Trustees decided to purchase land in the “outlying” suburb of Annandale. They hired an architect and plans to build the current facility took shape. MSNV opened its doors at 6820 Pacific Lane in January, 1968. The nature of the school remained largely unchanged until 1990, when MSNV obtained a Fairfax County Special Exception to add a toddler program and expand its hours to include before-and-after activities. At this time the upper elementary program was dropped and the parking lot enlarged.
In 1998, MSNV made a significant physical change by adding two new classrooms, a deck and extensive remodeling. At this time, a new Special Exception was required and granted.
In 2005, MSNV began making plans to expand the school by adding an upper elementary program. These plans eventually resulted in successfully receiving two more Special Exceptions. One enabled us to purchase and remodel of the Valleybrook School in Falls Church as our second campus and one allowed the original Pacific Lane site to increase ages and enrollment and expand our facility in the future.

In the fall of 2022 MSNV opened its Sleepy Hollow campus. Nestled amidst the picturesque landscape of one of Falls Church’s most established neighborhoods, this new campus will serve students in our Primary program and expand the school’s programming opportunities. Our newest addition offers generous indoor space for school-wide assemblies and programs, lush grounds for outdoor learning and play, and an opportunity to expand MSNV’s reach in the community.
Today, the Hillbrook campus can accommodate 168 students, ages 3-15; Valleybrook Campus can accommodate 90 students, ages 2-6; and the Sleepy Hollow campus has three classrooms and offer Montessori Morning opportunities for children and their parents/caregivers. We remain devoted to our lovely wooded and meadow settings and feel fortunate that so many years ago our early families had the vision to create such a special place. Thanks to the strength of our cooperative spirit then, now and all along the way, combined with the skill and caring of many outstanding teachers, MSNV continues to provide an exceptional Montessori education for young children.

Set in a quiet, wooded area, away from noise and distraction, the MSNV facility was designed to reflect the Montessori approach to education. It was created by two architect-parents especially for children: furniture, apparatus and even the sinks have been selected to fit shorter bodies and smaller hands.
1 / 4

As a complement to the wooded Hillbrook campus, Valleybrook is the school in the “meadow.” Located in Falls Church, Virginia, the Valleybrook campus includes a completely renovated building. Designed by an award-winning architect, large, light-filled Montessori classrooms and green technology including a green roof. The Valleybrook building and grounds are specially designed to meet the needs of children ages 2 to 6.

Nestled amidst the picturesque landscape of one of Falls Church’s most established neighborhoods, this new campus will serve students in our Primary program and expand the school’s programming opportunities.
1 / 4